Just like 'Nam, this is long. And a bit gross. And a little pointless. So if you're into that, keep reading.

Just making sure you knew.

Most of my days, I walk around with a giant boot on so my feet look like this. 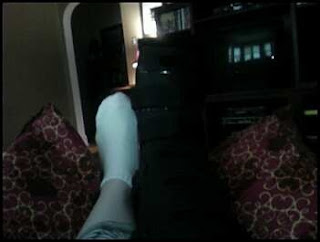 Yesterday, I had bandages removed from both sides of my feet and the toe they worked on. According to the xrays, it looks fantastic. According to my eyes, it looked like this. 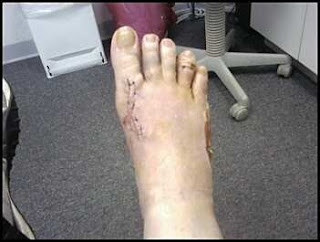 What's that? You want a closer look at the wire that is partially coming out of my foot? Ok. 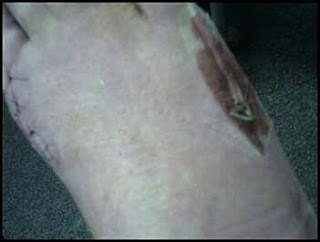 They then put bandages over the grossness after removing the stitches and sent me hobbling along my way.

This morning at about 3am, I sat straight up in bed with the most excruciating pain I have ever felt. It was coming from my wee toe, second to the last. The pentultimate toe, if you will.

Now, I am not a wimp about pain. I have a dead guy in my knee. When I fell and tore my ACL, I burned from embarrassment in a TaeKwonDo class, not pain. I believe that vicodin is a foreign term for "pill that makes alien baby rise from stomach," so painkillers aren't my bag. But JesusMaryandJoseph I thought my toe was dangling and ready to fall off. Because it had, at some point in the night, been dipped in hydrochloric acid. I was sure.

Scott once again sprouted wings and sprung into action - getting me another pillow to elevate, ice for my ankle and kisses for my forehead while he alternately told me to squeeze his hand and then remember to breathe. I forgot sometimes.

Finally, at 5AM, I decided the doctor should be called. I didn't want to go to the hospital again. They'd do something terrible like poke it for fun and show it to me. I knew they would.

The doctor called back within minutes. He told Scott to loosen the bandage.

Loosen the bandage? Well, sure. We probably have to look for the top of my toe. Unless it distintegrated, of course.

And so he did. And so the pain stopped.

Not surprisingly, I was exhausted this morning and I made us late. Scott dropped me off at the Montrose stop, only for me to find out the elevator is broken. Hopping up I went. The train took off a little fast and I had to put pressure on my boot to keep from falling. I could have been incredibly grumpy. But then I realized that's all I've been for weeks.

I started to notice some different things. I was well taken care of, and I have been this whole time. That wasn't news, but it hit me rather hard. Also, other people - strangers - were behaving rather kindly. At least four people asked if I needed help on the way up the el stairs. Doors were held when I got coffee and oatmeal.

Then, when I got here, a co-worker asked how my foot was doing. Berl is an elderly African-American man who came on when we outsourced our Office Services department. Kind to everyone and mild mannered, I told him about what happened. He patiently listened.

He then proceeded to tell me that he completely understood.

"I don't take painkillers, either. I'm with you on that. I had a collarbone injury,"
he began, which already told me this was gonna be way worse than my pain.

"Because I was shot there in Vietnam. Now, to fix that, they also had to cut away part of the deltoid,"

Oh my God so much worse.

I am an asshole.

"I had to relearn to move my arm."

On that note, have a great Memorial Day weekend. If you were planning on fucking off to somewhere, I hope it's somewhere good. If you plan, like me, to fuck off to a couple of barbeques, I hope they're delicious.

Just remember...nothing compares...to a 'nam wound. I really don't care how much you hurt. It's the trump card of pain.
Posted by Corrbette at 10:59 AM

Corrbette
I'm an actor, writer, singer, mother, wife, fast talker, public transit rider, hailer of cabs, and a big fan of swearing. I am a proud ensemble member of The Factory Theater, and I write plays. I also hang out with Bruised Orange Theater Company and regularly perform "I Saw You" with them at Town Hall Pub. I write for actors, for podcasts, for websites, and for myself at ungodly hours.